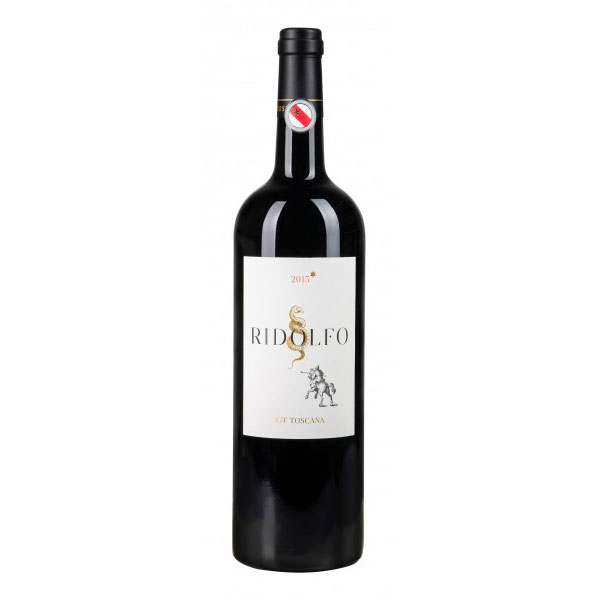 ROCCA DI MONTEGROSSI Ridolfo is the latest and strictly limited creation by Marco Ricasoli Firidolfi (only 1,659 magnums were produced). The wine takes its name from a progenitor of the family. The composition 50% Cabernet Sauvignon and 50% Pugnitello symbolizes the union between tradition and modernity and at the same time impressively represents the terroir of the Chianti hills.

Vibrant and finely sculpted, 2015 strikes from the start. A wide range of scents: lavender, spices, licorice and mocha open with time in the glass. The rose petal and cinnamon appear later, adding brightness and lightness. Cabernet Sauvignon and Pugnitello are not obvious varieties to assemble, as they are, on paper, more similar than complementary. This successful combination amazes and impresses.

Rocca di Montegrossi is located in Monti in the municipality of Gaiole in Chianti near the Romanesque church of San Marcellino.

The estate includes about 100 hectares; 20 of which are vineyards, another 20 are olive groves, and the rest are woods. The vineyards are on gentle hills facing south-east with limestone clay soils, at altitudes between 340 and 510 meters above sea level. The main grape is Sangiovese (13 hectares), followed by Merlot (2.5 hectares), while the remaining 4.5 hectares are planted in Canaiolo, Colorino, Cabernet Sauvignon, Pugnitello and Malvasia Bianca del Chianti.

The name Ricasoli is inextricably linked not only to the history of Chianti, but also to the history of Tuscany. Geremia, the founder of the Ricasoli-Firidolfi family, founded a castle (or Rocca) in Montegrossi in the 7th century AD. In 1141, the Castello di Brolio became a family property and the Ricasoli entered the world of wine. It was here that the “Iron Baron” Bettino Ricasoli created the “recipe” for Chianti in 1872.

Marco Ricasoli-Firidolfi, a direct descendant of Barone di Ferro, produces one of the best Chianti Classico on the market.

Quality is always fundamental, but respect for the environment and the conservation of natural resources were also of crucial importance for Rocca di Montegrossi. In 2006, the laborious process of converting to organic viticulture began, which was completed in 2010. Marco uses solar panels to obtain part of the energy needed for his cellar, while the rest comes exclusively from certified renewable sources.