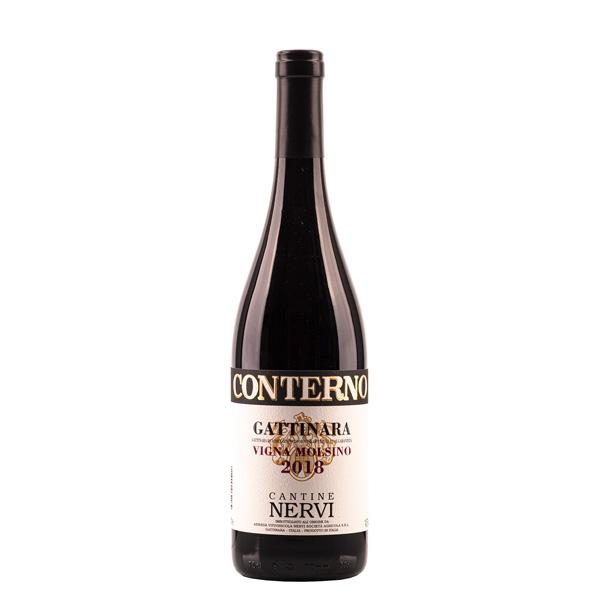 The name of this Cru di Gattinara proposed by the Nervi – Giacomo Conterno winery is Vigna Molsino. The name “Molsino” is a dialectal derivative of the Italian word for “soft”, and derives from the graceful contours of the hills that characterize the landscape of Gattinara and the warm, slightly breezy and sunny microclimate enjoyed by this CRU. Indeed, the wine is rich in fruit aromas of wild berries and black currant with solid structure and tannic texture. Graceful notes of violets, earth and iron ore follow. This Nebbiolo is very similar to a Barolo for its structure and its aging potential

Nervi is a historic reference producer of the Gattinara appellation. The winery was founded in 1906 by Italo Nervi and is the oldest winery in Gattinara, although many of the vineyards were already in the family dating back to 1679. The estate includes 28.5 hectares of vineyards including their best crus from Molsino and Valferana as well as Garavoglie and Casacce. These are historical crus of Gattinara – the mentions of Molsino in the municipal documents date back to 1471 and those of Valferana date back to 1231.

The Nervi family built the reputation of the estate, continuously managing it until 1991 when the steel magnate, Germano Bocciolone, bought the estate. Twenty years later, a group of Norwegian investors led by an avid wine collector, Erling Astrup, bought the winery. Astrup tried to push the level of quality to Nervi and sought advice from his longtime friend Roberto Conterno. In 2018, the group decided to sell the company and, wanting to sell it in good hands, felt it was better to offer it first to Roberto Conterno. Roberto hadn’t looked for a new winery, but the opportunity to acquire such a historic estate was too difficult to refuse. Roberto’s goal, together with his sons, is to apply the same meticulous attention to detail and quality to the wines of Nervi as the Giacomo Conterno estate. The wines are already traditional, pure and with great room for improvement.

Cantine Giacomo Conterno is one of the biggest names in all of Piedmont. The estate was founded in 1908 when Giacomo’s father, Giovanni Conterno, started a tavern in the town of San Giuseppe. Giovanni made Barolo from purchased grapes and sold what was not necessary for the tavern, as was customary throughout the region at the beginning of the twentieth century. The Riserva Barolo Monfortino was bottled for the first time in 1920 produced by Giovanni and his son Giacomo upon their return from the war. The myth began like this.