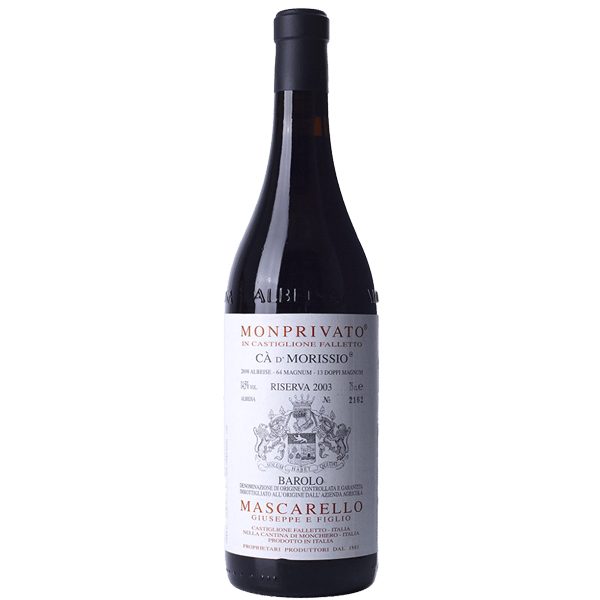 The Barolo Riserva Cà d’Morissio 2014 represents the culmination of over 130 years of great wines from Giuseppe Mascarello.

In the 1993 vintage Mauro believed that the grapes produced by the Michét vineyards, now in their third year of production, were ready to produce the first vintage of a new Barolo Riserva dedicated to his grandfather Maurizio. The entire production of the vines went into a single 27-hectolitre Slavonian oak barrel. After three years, Mauro removed three quarters of the wine to enter Monprivato 1993. He transferred the remaining six hectoliters to a slightly smaller barrel for further refinement, until he decided to bottle it in 1999 as Barolo Riserva Cà d’Morissio 1993.

Barolo Riserva Cà d’Morissio continued to grow until it became one of the great wines of the Langhe. On average around 4,000 bottles or less are produced, as the wine is a selection of only the best fruits of the Michét vines.

The Monprivato vineyard of the Giuseppe Mascarello company is located in the municipality of Castiglione Falletto in the heart of the Barolo wine-growing area. It is a historic vineyard, as confirmed by the old cadastral archives dating back to 1666.
The vineyard is located at 280 m asl on a calcareous soil, composed of gray-blue marl of marine formation. Traditional vinification with hat in suspension for 20/25 days. Aging in medium-sized Slavonian oak barrels for about 38 months.

Giuseppe Mascarello e Son has a long and illustrious history in Piedmont and is unequivocally one of the greatest producers of Barolo. This traditionally styled winery is now run by Mauro Mascarello, who is the fourth generation of the family running the company.

The origins of the estate date back to the mid-nineteenth century, when Giuseppe Mascarello made a name for himself in managing the vineyards of other landowners and who eventually decided to buy vineyards for his winery in 1881 near the village of Monforte d’Alba. His son Maurizio Mascarello bought the Monprivato vineyard in the nearby town of Castiglione Falletto in 1904 and moved the family business to this location. Since that day the name of Mascarello and the legendary Monprivato vineyard have been inextricably linked. In 1921 Maurizio bought an old and beautiful 18th century building in Monchiero and moved the family business there where he still resides today. When Maurizio died in 1923, his two sons, Giuseppe and Natale, took over the management of the company.

The Monprivato vineyard, with an area of ​​six hectares, is beautifully located to the south-west, in the municipality of Castiglione Falletto. The Mascarellos own all of Monprivato (having bought small lots from a couple of neighbors in the period between 1985 and 1990), making this vineyard a “monopole” along the lines of La Tâche.

The lands of Monprivato, together with the refinement of the Nebbiolo Michét variety, produce one of the most intriguing, complex and elegant interpretations of Barolo.

Mauro Mascarello is often described as “an enlightened traditionalist” when it comes to his oenological approach. There are no barriques or rotofermentini in the Mascarello cellars, as the wines continue to be aged in old Slavonian oak barrels purchased by his father in the 1950s.