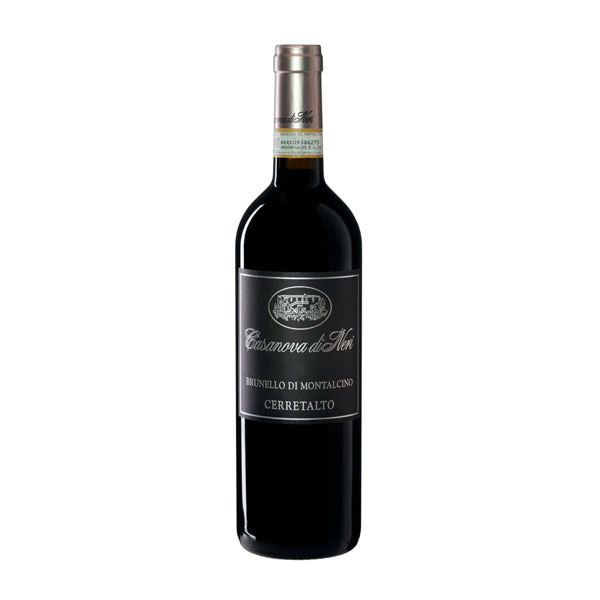 The Cerretalto di Casanova di Neri vineyard is located in Torrenieri on land acquired in 1971 by Giacomo Neri’s father, who planted the first 1.5 hectares there. In 1992 another 2.5 hectares were planted on R110 rootstock, using Sangiovese buds from cuttings taken from 36 Cerretalto vines, selected for their small and thick-skinned berries. This sprout is also used for replanting in the vineyards of the estate (e.g. during the replanting of Cetine and Tenuta Nuova).

Cerretalto comprises five blocks of vineyard, in a natural amphitheater, above and around the top of a hill, and therefore on a sloping ground, the vines are isolated from the other vineyards. It is located on the edge of the delimited region of Montalcino (the Orcia DOC begins on the other side) at about 500-1,000 meters from a bend in the Asso river. It faces east, so the wines have a cool climate elegance. Here the vines need more time because they ripen slowly. The soils are rocky, composed of marl with alluvial stones and degraded rock of mixed volcanic origin, whose red hue derives from a strong presence of iron, and also magnesium.

Casanova di Neri was founded in 1971 when Giovanni Neri bought a large estate in Montalcino. In 1991, his son Giacomo took over the management of the estate and winemaking, leading the company to be one of the most awarded for its Brunello di Montalcino
The 58 hectares of vineyards are divided into four distinct areas: Pietradonice in Castelnuovo dell’Abate, Cetine in Sant’Angelo in Colle, Cerretalto and Fiesole.
The Casanova di Neri vineyards express the territory and the microclimate of the region which, together with the care for each agronomicist, results in a fruit of optimal quality. The company’s production of Brunello di Montalcino is divided between three different labels to best represent the unique characteristics of the area.
The Fiesole vineyard, the oldest on the farm, is just north-east of Montalcino; produces exclusively Brunello di Montalcino.
In 1986 the Cerretalto vineyard was acquired. A natural amphitheater near the Asso river. The position of Cerretalto east of Montalcino and its unique terroir justify the separate bottling of this cru. On the opposite side of Montalcino and to the south-east, near Castelnuovo dell’Abate, is the Pietradonice vineyard planted with Cabernet Sauvignon. Finally, the Cetine vineyard: 25 hectares on a bucolic hill near Sant’Angelo in Colle. with south-south-east exposure. Its position, unspoiled nature, and the alternation between day and night temperatures, result in excellent quality fruit for Brunello di Montalcino.