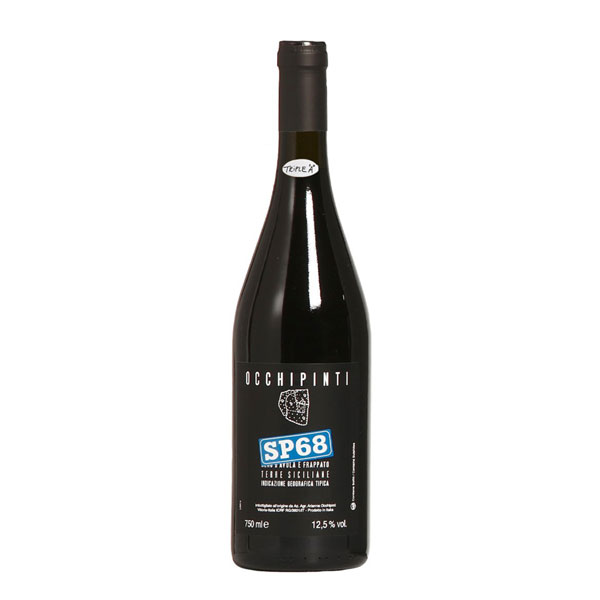 Arianna Occhipinti Terre Siciliane Rosso “SP68” is composed of 70% Frappato and 30% Nero d’Avola. The two vines are native to Sicily and grow on soils of red sand and limestone, with vines aged 15 years on average in four different sites. The vines are grown organically and harvested by hand. The fruit is mainly de-stemmed and fermented with indigenous yeasts in concrete tanks and with a maceration on the skins for two weeks. The wine is aged in concrete tanks for 8 months and bottled unfiltered. The wine takes its name “SP68” from the road near Arianna’s home vineyard in Vittoria.

Arianna Occhipinti is a young winemaker who launched her first vintage in 2004 at the age of 21. A cult figure of the biodynamic movement, Arianna treats 14 hectares of olive groves and 5 hectares of vineyards on the land around Vittoria, in south-eastern Sicily.

Occhipinti has built its reputation on Frappato, a secondary grape in Sicily usually used to revive the heavy Nero D’Avola. Arianna, with tenacity and stubbornness, has shown that Frappato can give great results even in purity.

Sammarco is a dense, complex wine, but at the same time agile and with a good freshness. Capable of long aging

The Brunello symbol of Castelnuovo dell’Abate