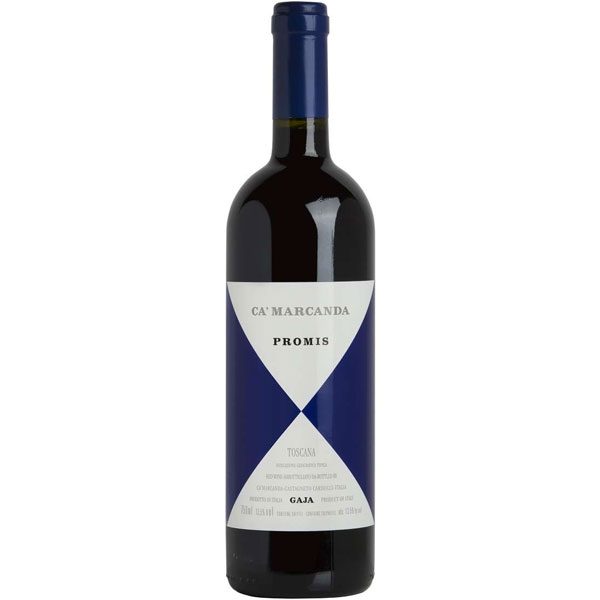 Gaja Ca’Marcanda Promis is one of the three wines produced on the Ca’Marcanda estate in Gaja together with Magari and their flagship Ca’Marcanda. The estate is located in Bolgheri on the Tuscan coast. Promis was first produced in 2000 and is bottled as a Tuscan Protected Geographical Identification.

Gaja is simply one of the most famous Italian wine producers. The company was founded in 1859 in the Langhe, Piedmont, by Giovanni Gaja and it is his great-grandson, Angelo Gaja, who manages the company. They are especially famous for the classic Piedmontese wines such as Barolo and Barbaresco. In fact, Angelo has often been called the “King of Barbaresco” and was responsible for the development of techniques that revolutionized winemaking in Italy.

Gaja bought his first property in Tuscany called Pieve Santa Restituta in 1994 and this was later followed by the second Tuscan property, Ca’Marcanda is located in Castagneto Carducci in Bolgheri, in 1996. While the focus in Pieve Santa Restituta is on wines more traditional, the focus of Ca’Marcanda is on international grape varieties (Cabernet Sauvignon, Syrah and Merlot) and on the “Super-Tuscan” style blends. The estate now consists of 100 hectares of vineyards.

Gaja Ca’Marcanda Promis is a blend of 55% Merlot, 35% Syrah, 10% Sangiovese. The vineyards are situations on clayey brown soils. The climate here is the typical Mediterranean maritime one characterized by hot summer days and cool nights refreshed by the local sea breezes that make a natural corridor between the coast and nearby Corsica. This allows the grapes to ripen evenly over a long period, which is ideal for grapes. The grapes from and from the Bolgheri vineyards in the nearby Bibbona area. The three varieties are fermented and macerated separately for about 15 days. After 12 months of aging in wood, the wines are blended and left to refine in the bottle for a few months before being marketed.

The name “Promis” indicates the commitment, or the promise of the Gaja family, to produce wines of the highest possible quality, the awards of diligence and excellence.