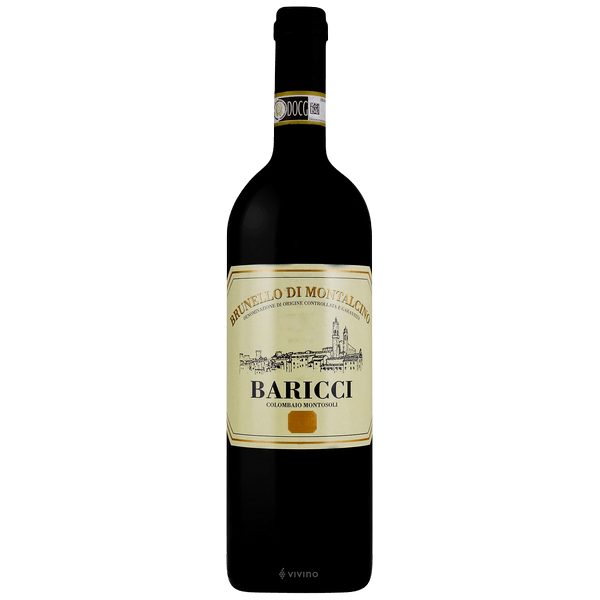 Brunello di Montalcino 2016 Baricci stands out for its mineral side (with marly soils, marine fossils, quartz and galestro schists), and this is precisely the magic of this wine. At the beginning there is a note of ripe grapes, then revealing forest berries, camphor ash and subtle touches of sweet spice. These elements come together like a fascinating mosaic. The wine is balanced and fresh. The presence in the mouth is in fact the strong point of this wine. Acidity is never a problem in Montosoli, located on the north side of Montalcino where the diurnal and nocturnal temperature changes play an important role in the slow ripening of the fruit.

The founder of Il Colombaio di Montosoli was Nello Baricci born on May 21, 1921, true patriarch of the denomination. His farm, founded in 1955 – “Colombaio Montosoli” – is located entirely on the hill of Montosoli – one of the most prestigious Crus in the northern quadrant of Montalcino.

In 1980 Brunello di Montalcino became the first DOCG in Italy and at the time of drafting the official map of the area, Baricci Colombaio Montosoli ranks first among the more than 200 producers quoted today. Number one because Nello, of the twenty-six original members, was accredited as Founder of the Brunello di Montalcino Association.

The entire Baricci Colombaio Montosoli farm and vineyards are located within Montosoli, where they have a handful of contiguous vineyards.

There is magic in the union between Nello Baricci – the legend – and Montosoli, the vineyard. Rarely does place and individual combine for such quality and history.

A vineyard and a producer who are now among the legends of Barolo.

A great Brunello di Montalcino in one of the happiest years.